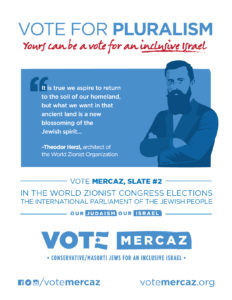 I had decided weeks ago to dedicate this week’s blog to the upcoming World Zionist Organization’s (WZO) elections (voting currently open) and my feelings about being on the MERCAZ  slate for the very first time.  I had no intention of engaging in discussion about the elections in Israel or using this platform to compare and contrast our ability to influence the Jewish future in Israel and abroad through either election process.

And I still don’t.

There continues to be a vigorous conversation about both the manner and outcome of Israel’s elections.  I am following it with all the passion I possess for Israel.  I am reading and reflecting on where we are and what it all means – for Israel, for the Jewish People, for pluralism and for peace.  As a private individual, I feel very comfortable sharing my feelings.  Just last evening, I had the pleasure of participating in a heated debate about Israel amongst friends at a local bar.  (I imagine it was one of the few conversations about Israel taking place at that bar, or any bar, in Jacksonville that evening.)  However, as a public individual, I feel equally comfortable admitting that I lack both the expertise and the standing to use this space to weigh in.

It is because I am the Executive Director of the Schechter Day School Network that I am a candidate on the MERCAZ slate for elections to the WZO.  It is a function of my positional authority, not my personal expertise, that I may be in position to serve.  This doesn’t mean that I am not taking it seriously.  I am!  I have learned things about MERCAZ and the WZO that I honestly should have already known without having to be put on the slate. This also doesn’t mean that I am not excited about it.  I am!  I am inspired about the mission, platform, and achievements of MERCAZ and its partner organizations.

It should come as no surprise, however, that as an educator what I am most proud/excited/inspired by is the incredible opportunity to help grow the TALI Network of Schools – a sister network if there ever was one.

Here is why Israel needs TALI:

Every Jewish child in Israel deserves a Jewish education. But most go without.

Jews in Israel are deeply divided along religious and secular fault-lines – a divide that tears at the fabric of Israeli society. For sixty years, this division has been fostered by Israel’s school system which operates only two educational streams: religious and secular.

Yet most Jewish Israelis define themselves as neither Orthodox nor secular, but as traditional. They identify with Jewish culture and heritage, but feel alienated by a rigid, politicized religious establishment. By sending their children to secular public schools, most Israeli parents have forfeited their children’s right to a Jewish education.

TALI brings Jewish learning to the secular Israeli classroom, connecting pupils with their heritage, and educating towards religious pluralism in the Jewish state.

This quote comes directly from the TALI page on the Schechter Institute website.  Although there are many differences between public TALI schools in Israel and private Schechter schools in North America, this statement of need serves as a powerful reminder of how critical it is that the center – the mercaz – does, in fact, hold. TALI is more than a network of schools in Israel.  It is a thought-leader and program-provider to the field of Jewish education.  TALI is critical to growing a pluralistic future in Israel.  Schechter schools are already in relationship with TALI schools and I hope this relationship only deepens in the years to come.  I am inspired by TALI’s accomplishments and can only dream of what it could become with access to greater resources.