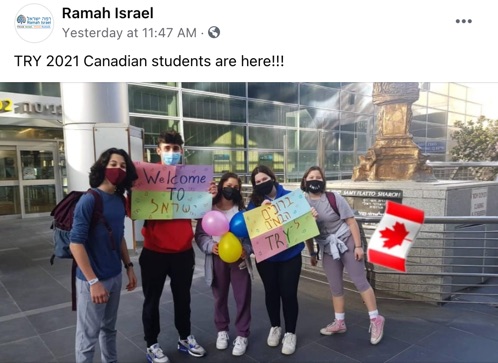 I think after last week’s blog post was rendered moot by outside events within hours of publication, you’ll forgive me for seeking comfort in a non-COVID and pretty much a non-OJCS conversation…and I like the idea of talking about Israel as we just commemorated Yom HaZikaron and are now celebrating Yom Ha’Atzmaut.

My oldest daughter, Eliana, pictured above in the middle, arrived this week to Jerusalem where she was supposed to be spending her spring semester of Grade 10 as part of the TRY (Tichon Ramah Yisrael) Program.  With her bags packed since January, the universe finally aligned itself this week, and teenagers from all over North America have finally found their way to Israel.  Leaving aside the impossibility that I could be old enough to have a daughter old enough to be doing this, I thought it might be a good opportunity – especially since teen Israel experiences that aren’t the March of the Living aren’t particularly well-embedded in the culture here in Ottawa – to make a pitch and a plea for teen Israel experiences.  (And, yes, I am aware that lots of Canadian Jewish day schools do have Israel trips, and yes, I would LOVE to see us eventually do that here in Grade 8.  But that’s a different post for a different time.)

Like a lot of Jews of my generation, a teen Israel experience (along with Jewish summer camp) was a crucial step on my Jewish journey.  It also was my very first job in Jewish education.

I first went to Israel in 1988 as part of our local Federation’s teen tour.  It was an extraordinary experience and I met friends that summer that I am still close with today.  I returned to Israel in 1992 as part of a NFTY in Israel summer experience.  My very first job in Jewish education was working for the Bureau of Jewish Education of Greater Los Angeles (BJE-LA) running teen programs, paramount of which was the LA Summer-in-Israel Ulpan.  I cannot provide a link to the program because, unfortunately, it no longer exists, but for many years it was a signature summer-in-Israel program combining the regular touring experiences of other trips with an actual Hebrew ulpan for which students received high school and college credit.  I spent the summers of 1997 and 1998 leading this trip and having an opportunity to provide teens with the experiences I had been blessed to have as a teen myself.  And now as a parent, I am blessed to pass it forward to my children.

The power of the teen Israel experience is real.  Here’s excellent proof (even if a bit dated):

A 2011 study conducted by Ramie Arian and sponsored by iCenter indicated the following:

Based on two iCenter convenings of 30 teen Israel trip stakeholders, the following was underscored:

I am so excited/thrilled/jealous that my daughter gets to have this first amazing Israel experience and I look forward to seeing over the next months and years how it impacts her and our family.  And I look forward to my next daughter’s experience when it becomes her turn.  In the meanwhile, in this week that we celebrate Israel’s birthday, let us pledge not just to celebrate her with flags and falafel, not just with social media posts and tzedakah, but with a commitment to bring as many of our teens to Israel as we can.

And for the folks here at OJCS…are we ready to start talking about a Grade 8 GRAD Trip to Israel?